Start a Wiki
The City of Ember 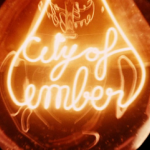 The City of Ember is a 2003 post-apocalyptic book.

A great war rose upon the nations, and to keep mankind safe trusted people were put into an underground city where after time their children would no longer know what was above, a box was past down with the secrets inside it left to only count down to 200 years. But when a mayor died, the box was lost. Now Ember is falling apart and the only choice left. Is to escape.

Retrieved from "https://hungerlive.fandom.com/wiki/The_City_of_Ember?oldid=10049"
Community content is available under CC-BY-SA unless otherwise noted.